An entrepreneur’s Journey from Founder to Seeing his Company Acquired
By UCR Office of Technology Partnerships | March 31, 2022

When Mark Adams left his job in 2011 to start Inviscid with four colleagues, he took a leap of faith hoping that the product they were developing would succeed within the Autism therapy community. They bootstrapped the company putting in the time, effort, and their own capital to develop software that helps Applied Behavioral Analysis (ABA) therapists and autism clinics improve productivity, as well as improve the quality of life for their patients.

Inviscid provides practice management, clinical, parent portal, and billing software as a service (SaaS) to therapists and clinics who work with individuals on the autism spectrum. Today the Inviscid software serves thousands of end-users, across the country, every day.

In 2014, Mark came across the Temecula Valley Entrepreneurs Exchange (TVE2) and got accepted into the incubator. This was a turning point for Inviscid as Mark was able to get help through a network of entrepreneurs to get the company funded. As part of the incubation process, the Inviscid team learned about business fundamentals, developed the business plan, and practiced their pitch.

Meanwhile, Larry Morgan, an experienced CEO and commercialization expert joined UC Riverside’s (UCR) Office of Technology Partnerships (OTP). In 2016 together with Rosibel Ochoa, he launched UCR’s Entrepreneurial Proof of Concept Center (EPIC) a program that became the cornerstone of the entrepreneurial ecosystem that UCR continues to grow across the Inland Empire. Funded by a grant from the Economic Development Administration i6 program, UCR EPIC provided business mentorship, training, and access to capital to technology entrepreneurs in the region. To date, UCR EPIC’s affiliated programs have supported over 600 innovators in the Inland Empire. 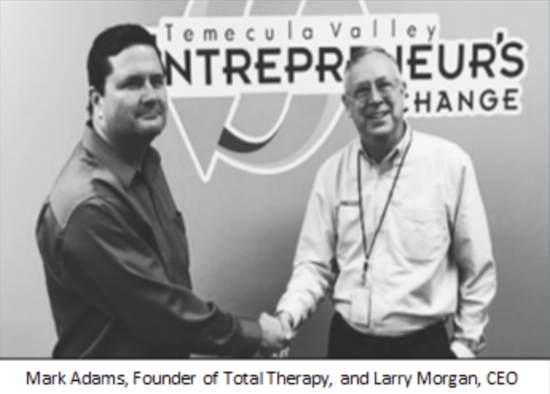 As a judge for a pitch competition at TVE2 in July 2017, Larry heard Mark Adams pitch his business and it caught his attention. At that point, UCR EPIC began providing additional mentorship and entrepreneurial training to Mark’s company to support his fundraising efforts.

By the end of 2017, the company reached $500,000 in revenue. Larry decided to invest in the company and bought it in February 2018, stepping out of UCR EPIC’s Director role and into the CEO role for Inviscid, renaming it TotalABA.

This infusion of capital was key to the growth of the company, as this enabled the full-time hiring of the founders as well as the hiring of additional employees, which added to Larry’s business expertise allowed the business to accomplish in a few years what the founders had tried to do for the past seven years. The company stayed in the TVE2 incubator where the team continued to build the services portfolio, hire locally, and provide internships to UCR MBA students.

Utilizing the customer discovery process that Larry taught at UCR EPIC, the team was able to translate the insights they received from their customers into a product development roadmap to continuously enhance the offering and add products and features needed by their end-user. In less than three years the company grew from five to fourteen employees and reached almost $3 Million in sales, processing over 2 million billing transactions annually, and providing software as a service (SaaS) to almost 10,000 licensed users.

In September 2021, TotalABA was acquired by Rethink First, a New York-based global health technology company looking to realize the synergies between the two firms. Rethink First provided cloud-based treatment tools, training, and clinical support for individuals with developmental disabilities and their caregivers. They saw TotalABA as an ideal partner and an opportunity to expand their support and provide services to the greater behavioral health marketplace including speech, occupational and physical therapists, and practices. Now acquired, TotalABA has become Total Therapy as a division of Rethink First, Larry is the CEO for the division and Mark is the Chief Technical Officer. All of TotalABA’s 14 employees remained with the company.

“This acquisition has given me the satisfaction of starting something from an idea and a dream, and seeing it turn into a viable company with employees and customers while helping the autism community,” said Mark Adams, founder of Inviscid, now Total Therapy, a division of Rethink First.

“There’s a wealth of talent in the Inland Empire and you can find a lot of high caliber people here,” remarked Larry Morgan, CEO of Total Therapy. Larry’s and Mark’s advice for entrepreneurs in the region is that “There are a lot of resources available to entrepreneurs in the Inland Empire, you don’t have to go to Silicon Valley! There are people here to help, you just need to be willing to take advantage of those resources.”

UCR EPIC provides entrepreneurs like Mark with mentoring, by experts such as Larry, who provide training and access to capital to help advance their ideas and grow their businesses.  For more information on how UCR EPIC can support you or work with you whether you are an entrepreneur or an investor click here  and visit www.techpartnerships.ucr.edu.